WHAT IT IS?
The pubic inguinal pain syndrome is described in various ways (sportsman's groin, sportsman's hernia, sports hernia, athletic ostio-pubis, Gilmore groin, groin disruption) but, in spite of the absence of a common term, its pathology is characterized in all cases by a chronic pain of the pubic bone or inguinal ligament that increases after exercise. 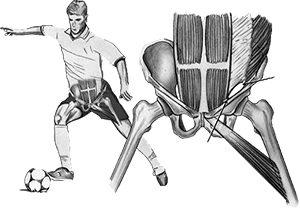 Initially, it was commonly accepted that this condition affected typically professional athletes, because its onset is facilitated by a daily practice of sports involving sudden changes of direction or intense torso twisting. Now, present knowledge indicates that not only athletes are affected but in general thin build, adults aged between 20 and 60.

Patients usually refer a dull/diffuse/sharp/burning pain in the inguinal zone, often spreading along the inner thigh, scrotum, testicle and pubic bone. In the early stages, pain generally does not arise during the competition but after it finishes. The symptoms are increased by those movements like kicking, sudden changes of direction, intense body twisting, coughing or sneezing, and such techniques as the Valsava manoeuvre. Pain may be so severe as to seriously affect or even stop sporting activities.

Contrary to what one might believe, and unlike usual inguinal hernia, the pubic inguinal pain syndrome does not show any visible swelling in the inguinal canal.
PATOPHYSIOLOGY

Many attempts have been made to explain the pathophysiological mechanisms that cause the pubic inguinal pain syndrome, like a weakness of the lower abdominal wall, an imbalance between the (strong) adductor muscles of the hip and the (weak) abdominal wall, a general low strength, a limited extensibility, or a poor coordination of the synergistic musculature necessary to effectively control the movements of the hip. This deficiency could cause functional instability, overload and damage to non contractile structures like tendons or ligaments. One of the present theories suggests that pain could be exacerbated by the compression of one or more nerves, such as the obturator nerve, the genital branch of the genitofemoral nerve, the ilioinguinal nerve, the lateral femoral cutaneous nerve. This compression seems to be caused by a local swelling resulting from a weakness restricted to the posterior inguinal wall during the Valsava maneuvre. 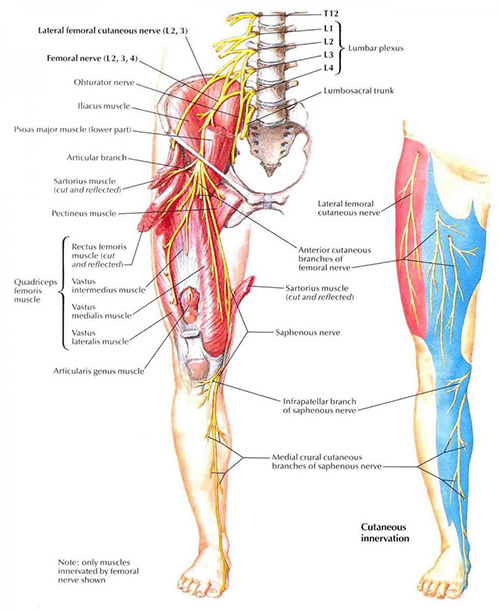 A football player is frequently afflicted with pubic pain, and often a short period of limited activity or complete rest  is enough to eliminate any symptoms. If pain persists or becomes more severe, a competent doctor should be sought immediately. After collecting anamnesis data, a clinical evaluation of the injury and, if necessary asking for specific tests, they will make their diagnosis. A correct diagnosis is essential for a proper rehabilitation.

To make a diagnosis of pubic inguinal pain syndrome it is necessary to exclude other pathologies that may be improperly attributed such as urological diseases (prostatitis), pelvic stress fractures, muscle or tendon injury, etc. In these cases, physical examination must be supported by ultrasonography and/or magnetic resonance imaging.

Once the pubic inguinal pain syndrome has been diagnosed, a conservative management should be advised initially. Treatment consists of analgesic therapies and/or physiotherapy combined with rest periods. A functional training program is then prescribed, including isometric, concentric and eccentric contractions aiming at increasing abdomen and buttocks stability, as well as the strength and coordination of the muscular groups inserting into the pubis. At the end of the treatment the majority of patients are able to restart activity. In contrast, if the results obtained with a conservative approach are not satisfactory, surgery (often performed laparoscopically) becomes necessary and is resolvent in about 90% of the cases.

After the surgical treatment walking with a physiotherapist is advised from the first day and ice will be applied within the first 48 hours to dull the pain. After discharge from hospital rehabilitation needs to be continued with physiotherapy performed as described above. The return to the field should be possible 6-8 weeks from the date of surgery.

Read the previous article to learn more about the pubic inguinal pain syndrome.