The tone of voice | YouCoach Skip to main content

The tone of voice

The tone of voice

In the past few  months we have been discussing effective communication. As I wrote previously, my aim is to increase the skills of you readers, to make you aware of your usual way of dealing with your boys and, if necessary, of the need to change it to increase efficacy.

The tone of voice is part of non verbal communication. It can be low, loud, just perceptible, eccessive...

Many coaches/teachers do not realize how loud or low they are speaking, and that the variation of their vocal tone can greatly affect communication efficacy.

First of all, it is important to read our players’ feedbacks to get information on how we are using our voice: Do they often ask us to repeat? Do they say they can’t hear? Do they often show wrinkled foreheads or strained ears? It is not always their fault!

Maybe our tone is too low, as would be appropriate in a gym but not in a noisy open space: there are often other teams practising at the same time, airplanes, trains or traffic passing by, etc. It is important to find the right volume of voice so that our messages arrive in a clear and direct way. Also when the players are already displayed on the field it is necessary to raise our voice, in addition to taking a suitable position.

Anyway, most of the time the problem is that the coach is continuously shouting! Coaches shout to explain an exercise, even the first time they propose it, they shout to repeat, or correct, or give feedback, during the match and in the locker room between the first and second halves (if you get by there you can easily take notes ….)

Beside the physical effort and often unecessary energy expense, speaking continuously aloud and yelling has many other drawbacks. Shouting continuously is harmful: it irritates and tires us, gets on the players’ nerves and transmits that feeling of accusement so usual for young people who are blamed through a raised voice in different contexts: at school, at home, on the field.

Shouting subconsciously recalls the typical feelings of a reprimand: rage, frustration, feeling guilty, distress, depending on the individual’s past experiences.

Moreover, shouting out of habit invalidates a most effective instrument for the management of the team and the indivuduals, because it makes shouting become a sort of background noise even when it might be a necessity. If young players get used to shouting they don’t realize that in a given moment it means instead a way to stop them, for instance in a bad or dangerous behaviour (especially true for younger children) 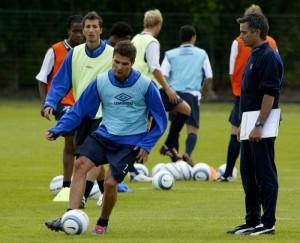 Paradoxically, it is more effective to fall silent suddenly when we want to call a messing-up team to oder (it happens so often with children!). Indeed, children/boys are not used to a silent educator and, therefore, they get puzzled and look at us, they perceive our disappointment and begin stopping one by one and calling each other. I invite you to try this strategy, to be used with great coherence and firm attitude to be effective.
As a conclusion, it is essential to find the suitable tone of voice according to the context, and to vary it according to our objectives: I raise my tone to call the team, draw attention more quickly, point out an important notion, stress a key word, order the group, indicate the change of exercise, etc. On the other hand, I’ll choose to lower my tone to explain in detail a particularly important or delicate notion, speak to a single player approaching him in the group, boost players’ confidence and calm.